PILGRIMAGE: WALKING IN HIS TRUTH

This post considers a painting of mine, currently (June, July and August 2013) on exhibition in Argyll as part of the Iona 2013 celebrations. The exhibition is named IN THE FOOTSTEPS OF COLUMBA. 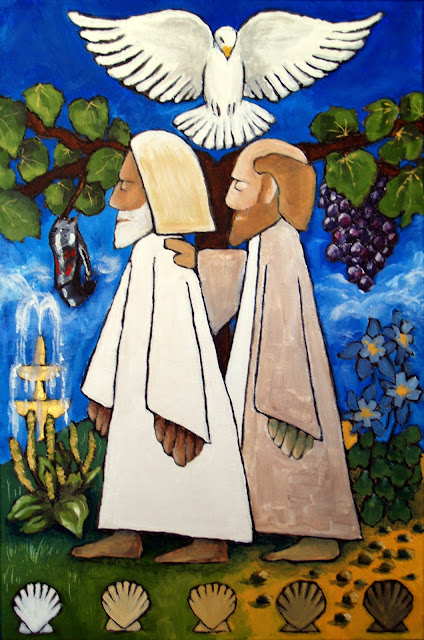 The painting exhibited is the middle segment of an illustrative triptych (as yet incomplete), taking as its inspiration the idea of Pilgrimage. Although often taken to be merely a journey to a shrine or holy place, the scriptural idea is one of 'walking with Jesus' - in reality, allowing the Holy Spirit to govern one's life so completely that the spirit of those faithful and that of God are inextricably joined.
John 17:23 "I in them, and thou in me, that they may be made perfect in one; and that the world may know that thou hast sent me, and hast loved them, as thou hast loved me."
In the Bible, the word translated as 'pilgrimage' means 'dwelling place', and so the destination - the shrine, so to speak - is that of being 'made perfect in one' which John relates. The believer's walk with Jesus follows a pattern of maturing; growing up to the point where - in community with all those 'called of God' - they become 'His dwelling place'.

This middle panel illustrates some of the spiritual significance of the second of the three Great Feasts of Israel - Pentecost. (The first is Passover, the third is Tabernacles - addressed in panels 1 and 3). Pentecost is representative of many matters of faith; the coming of The Holy Spirit to men, bringing clarity of understanding and wisdom; it means spiritual discernment; a coming in to The Holy Place from The Outer Court in the Tabernacle of God, and also the revelation of the truth as expressed in the person of Jesus Christ.

Saint Columba stands as our representative in all three illustrations. He is not our intercessor with God, for only Jesus has that honour, he merely stands in our place as a saint of God and could fairly be substituted by any individual 'used of God'.

The Bible is filled with images and allusions that reveal how this can be achieved, many of which informed the medieval and Renaissance painters in their work. Some of these metaphors are used here, and thus the concept of this part - and the triptych as a whole is based on patterns as used in Scripture and as used by artists of the past (particularly in the medieval and Renaissance periods).

LAYOUT - The triptych reads from right to left and not in the 'western' convention of left to right. This is to highlight that our walk with Christ follows the sun from east to west (right to left to follow the usual reading) and illustrates Isaiah 55:6-11 showing that our ways run in the opposite direction to God's ways.
6 Seek ye the LORD while he may be found, call ye upon him while he is near:
7 Let the wicked forsake his way, and the unrighteous man his thoughts: and let him return unto the LORD, and he will have mercy upon him; and to our God, for he will abundantly pardon.
8 For my thoughts are not your thoughts, neither are your ways my ways, saith the LORD.
9 For as the heavens are higher than the earth, so are my ways higher than your ways, and my thoughts than your thoughts.
10 For as the rain cometh down, and the snow from heaven, and returneth not thither, but watereth the earth, and maketh it bring forth and bud, that it may give seed to the sower, and bread to the eater:
11 So shall my word be that goeth forth out of my mouth: it shall not return unto me void, but it shall accomplish that which I please, and it shall prosper in the thing whereto I sent it.

One Dove. 1 signifies God, and the dove is a symbol for The Holy Spirit, an aspect of God. Genesis 1:2b And the Spirit of God moved upon the face of the waters.
Two Figures. 2 is the number of witness, and those of faith must witness to and be a witness for Christ.
Three Feet to reveal that the walk must be inspired by God. Psalm 37:23 The steps of a good man are ordered by the LORD: and he delighteth in his way. The feet are also unshod to show a clean-ness of walk.
Four Hands to represent creation, the world and a solid foundation. (4 elements, 4 winds, 4 corners of the earth, four-square, etc)
Five Scallop shells. Five is usually taken to reveal the grace of God.
Six symbols behind and around the 2 central figures - six is the number representing man (created on the 6th day), and these 6 symbols show things which the natural world teaches us about the heaveny realms.
Seven Basic colours used (excluding white) - blue, green, ochre, red, gold, brown and black - to indicate the perfecting work of God in Christ Jesus.
Eight Colours. As above but including white, to signify the new life in The Holy Spirit.

DOVE - symbol of the Holy Spirit (See Luke 3:22  And the Holy Ghost descended in a bodily shape like a dove upon him, and a voice came from heaven, which said, Thou art my beloved Son; in thee I am well pleased.)

SKY - represents the 'Heavenly Realms', living in the Holy Spirit.

GRAPES - (fruit of the vine) the cluster; representing the fellowship of the mystery, or the community of believers.

BUTTERFLY - Used as a symbol of life, death and resurrection. The Chrysalis stage (as here) is death, a metaphor for dying to our old life.

JESUS AND COLUMBA - both figures now walk from east to west, with Columba following in the way of Christ, who is robed in white to denote purity and holiness. Columba's garment on the other hand is only part white to denote that he has yet to reach perfection, but that the Lord is nonetheless working in him.

CLOUDS - symbol of the unseen God and represents the veil.

COLUMBINE - Latin for Dove (columba) and sometimes represented the gifts of the spirit (from Isaiah 11:2). St Columba (an colm chille) was known as "the Dove of the Church". 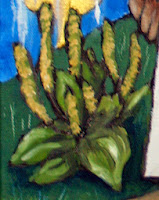 PLANTAIN - common plant which thrives along roads and pathways. It became known as 'waybread', and a symbol of the 'well-trodden path' of the multitude that seek the path to Christ.

FOUNTAIN - Song of Solomon 4:12 and Psalm 36:9. Also another symbol of the Holy Spirit. Also "rivers of living water".

COCKLESHELL, SCALLOP - signifies Pilgrimage. Scallop often represents St James the Great. Generally supposed to allude to the countless pilgrimages made to his shrine at Compostella in Spain. Artist Alexander Hamilton pointed out that the scallop became thus associated as it was readily found on this journey to Compostella and that the two halves could be used by pilgrims for the Breaking of Bread. The flatter part of the shell served as a small plate for the bread, while the deeper top shell could be used as a makeshift cup for the wine. In this way, the true meaning of pilgrimage becomes intertwined with the sacrament that Jesus gave to His followers to lead them into all truth.
These are all only part of the 'reading of this painting. Each colour can be assigned a 'spiritual' meaning, and the relationship between this and the other two panels has a story to tell.
The style of the painting alludes to the idea of a stained-glass window in a church, and the image has been kept deliberately straightforward and 'un-painterly'.
Ultimately the intention is to reveal that we cannot know Jesus without the intervention of the Holy Spirit, who reveals the truth of God in all things and progresses our pilgrimage towards its fullness of expression in tabernacling with God.
John 15:4  Abide in me, and I in you.
As the branch cannot bear fruit of itself,
except it abide in the vine; no more can ye,
except ye abide in me. 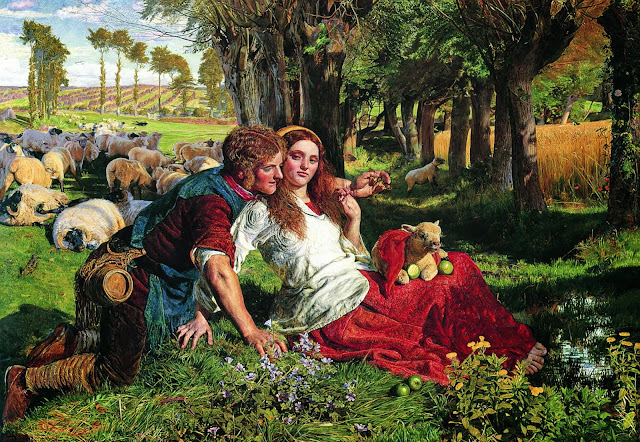 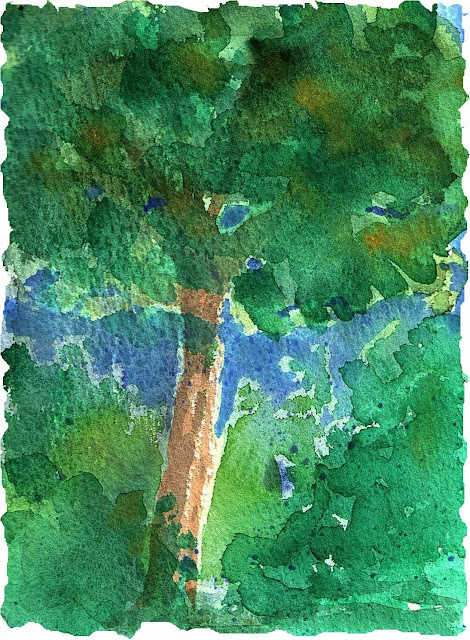 A GOING IN THE TOPS OF THE MULBERRY TREES 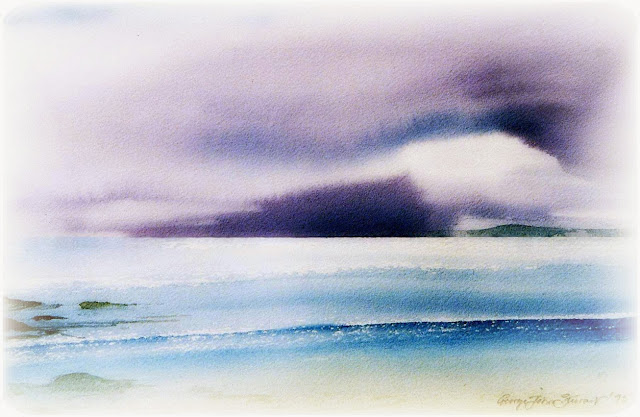 'AND THE LORD ANSWERED ME AND SAID, WRITE THE VISION...' 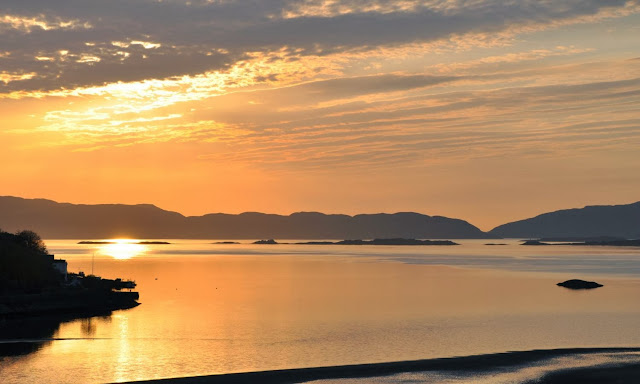 "DID NOT OUR HEART BURN WITHIN US?" 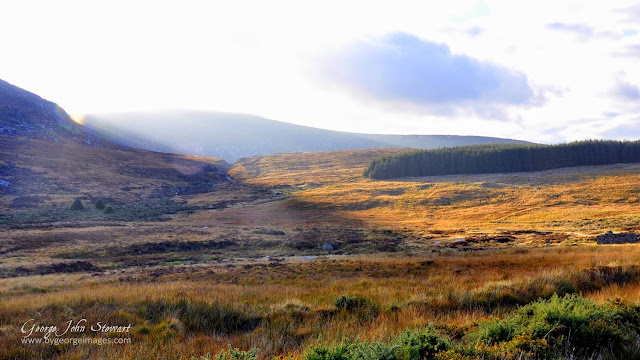 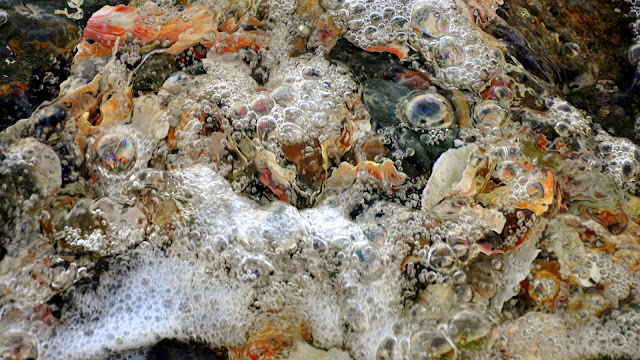 I WILL GIVE YOUR LIFE TO YOU 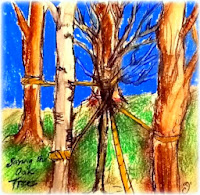 THE UNITY OF THE FAITH 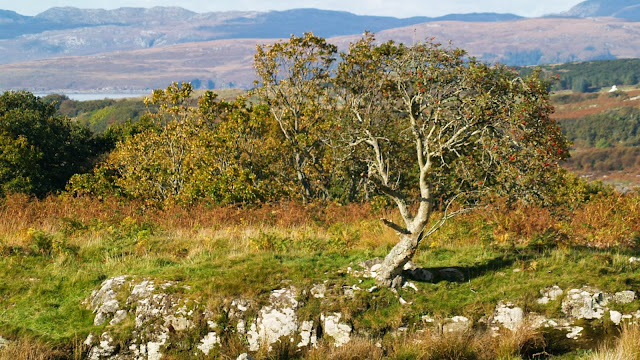 Posted by George Stewart of Dalbuie Tuesday, May 12, 2015

"THE PREACHING OF THE CROSS ... IS THE POWER OF GOD"

GOD SHALL BRING THEM INTO THE LAND